DB3 is small batch, only open Fri-Sun and closes at 2pm. Basically, blink and you’ll miss them. AND WON’T YOU BE SORRY. These donuts are delicious. Like I’m even eating blue because they’re so good. Though their flavors change monthly, they almost always have “standards” like maple cinnamon (as close as you’ll get to cinnamon toast crunch in donut form) and some kind of homemade jam-filled delight on the menu. MMMMMYES.

And while some holidays are spent with family honoring age-old traditions, others, like National Donut Day, might best be spent opening a big box alone in your car….. #stickysteeringwheel4life 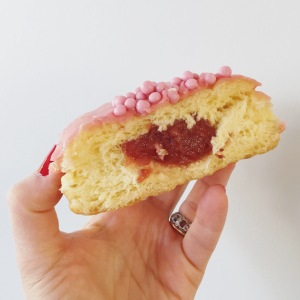 On the rare occasion that I am up and about in the morning (like on National Donut Day), I recognize my place as an outsider as I marvel at the calm other-worldliness of it all. Who are these early risers? These dog walkers, these stroller pushers, these I’ll-have-my-ususal coffee drinkers…..do they all know each other? Do they have a secret nod? Can they tell that I’m not really one of them? I bet they can. Just the way I can tell that 90% of the people standing in donut lines today are not really donut eaters. 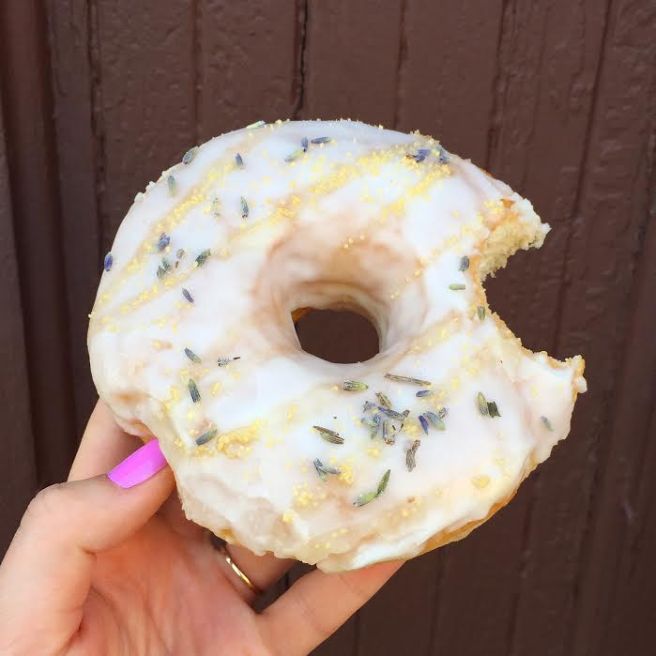 Much like the night before Thanksgiving when a bunch of non-cooks are bumbling around clogging up grocery store aisles, National Donut Day has become a national cheat day with early bird weight watchers coming out of the woodwork to get their yearly serving of frosted fried dough. You’d think donut shops would be the natural habitat of the single digit o’clock crew, but they aren’t quite.

If you joke that honey lavender is a candle scent and not a donut flavor, this day is not for you. If you are normally slurping protein smoothies or plain oatmeal or gnawing on carrot sticks and giving me dirty looks while I order a half dozen with a fork, I will see you later. If you change your single donut order 3 times at the cash register, please move to the back of the line. Or better yet, there should be two lines similar to the TSA: one for frequent donut eaters and another for those who are wearing lace up boots and toting full-size bottles of shampoo. Because NEWSFLASH: donut amateurs are causing donut shops to sell out by 9:15AM. The gall. Where have they been for the other 364 days? And now it’s NINE FIFTEEN IN THE GD MORNING AND THE DONUTS ARE GONE.

Since this is the reality that we now live in, let me give you a few tips:

1) Get there early – there will be lines, even at Dunkin’. Come on.

3) When in doubt, let your fingers do the walking. I’ll be seeing you on a non-holiday, Daylight Donuts, and I will obvs be getting a “Something To Crow About” shirt since donuts are one of my top crowing topics.

(featured above: free donut with any bev at DD. maple bacon apple fritter, strawberry basil, honey lavender, saigon cinnamon sugar from Pandamonium. all purchased before 8:30 in the morning and now I’m going back to bed.) 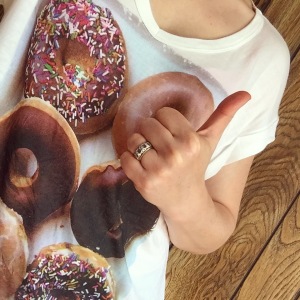 Alarm set for single digits? Check. Ready to hop out of bed bc I’m already sleeping in a donut t-shirt? Check. Mapped list of hot spots? Check. Girl Scout over-preparedness at full throttle? Yes. But did I really believe Central Illinoisians would be skipping school/work/sleep to celebrate a food holiday? Not reallllllyyyy……..

Bright and early (8:35!! AM!!!!!!!!!!!!) and in a big ol’ line at the Pandamonium Doughnuts truck where they were already sold out of their free, new release of black and white donuts. What?!?!? People were actually lined up at 7:30am?? Oh yes. (caramel apple fritter, cookies n cream, “You wore that shirt on purpose, right?”)

On to Art Mart, where people were going about their morning routine none the wiser that the nation is joined in celebration. But tucked amongst the breakfasty baked goods was a tiny “Ye Olde Donut” sign, and standing behind the counter was a barista who exclaimed, “You’re wearing a donut shirt! And it’s National Donut Day! I love it!!!” She knows. (maple glazed cake, Bavarian cream long john – like a Boston cream pie, mmmmmmm)

My donut day trek took me then to Carmella’s Creme where the cases were filled like I’d never seen before! They. Were. Prepared. Rows of twists, oceans of sprinkles. Tables of every-day-is-donut-day patrons eager (“Well look at that – a donut shirt!”) to learn some Donut Day history. I think some of them may have been around for the inaugural event…. (sugar dusted raised, glazed chocolate cake!) 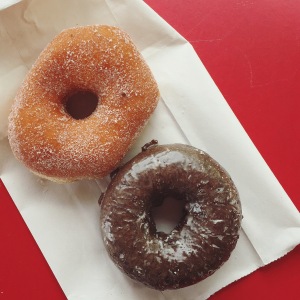 Finally a quick coffee at Dunky to round out my morning (all this before 10am – aren’t you impressed??!). Aaaaaand a couple more donuts. Aaaaand a whole staff of donut t-shirt groupies: “look at her shirt!” “come here, did you see her shirt?!” “donut shirt!”  <—italics = whispers. (classic strawberry frosted with sprinkles, and actually one of the best puffy, eggy crullers I’ve ever had in my life, made even better by the fact that it was FREE with my coffee purchase in observance of the holiday) 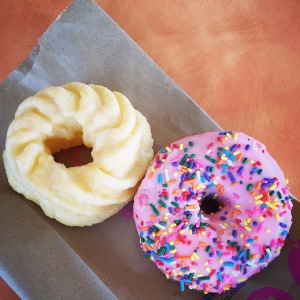 And now back to bed to dream of sugary ethereal halos. I’ll be hanging up my new uniform until next year. Or at least until next week…….

Driving past insane queues at California Donuts (nope) I headed over to SK Donuts where there were a reasonable handful of people in line. Uh, but guess what? They were walking up to EMPTY shelves and ordering dozens. What?? Have they lost their damn minds? Has everyone turned into a donut-fueled robot?? How can you place an order for something that DOES NOT EXIST? Also, I’m gonna say it’s fairly rude to order one dozen donuts when there are children (children!!) waiting in line with nothing but empty hands and empty stomachs. Come on people, act civilized. I ordered one simple raised glazed melt-in-your-mouth-and-in-your-hands donut with a small coffee like a considerate regular and paid with a lucky $2 bill for good donut karma.

And lest you think National Donut Day is just another made up holiday created for the sole purpose of eating yourself into a fatty plumpy dumpling sugar coma until your eyes glaze over (see what I did there?), think again. This holiday began way back in 1938 as a way to commemorate “donut lassies” – female Salvation Army volunteers who provided writing supplies, meals, and of course, donuts, for soldiers on the front lines during WWI. So act classy and think of the lassies!