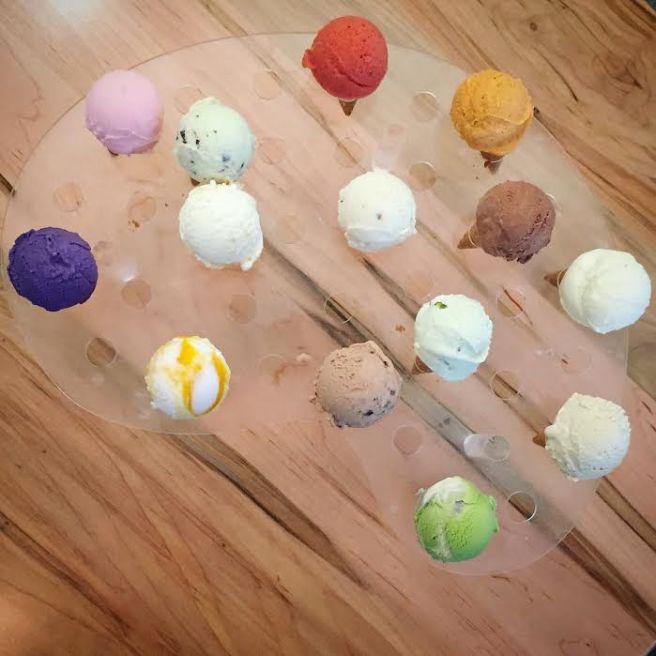 If you live in LA, you know it’s only an hour to the beach/an hour to the mountains/an hour to the desert….. Get ready, because now, in much less than an hour, you can travel to destination: ANYWHERE (time reference: you can now travel the globe more quickly than it takes to cross under the 405 at 5pm). All you need to do is get yourself to Wanderlust Creamery.

Once there, if you know where you’re going, coolcool, pick a cone and a scoop and get on with it. But if instead you’re feeling a little lost or undecided, a little adventurous, a little filled with…. shall we say….WANDERLUST, that cashier’s counter turns into a travel agent’s desk and for a mere $30 you can book a Flight Around The World!

Some decisions will still need to be made. Wanderlust offers around 20 different flavors inspired by places the owners have been/want to go. Since the flight is made up of ONLY fourteen gold ball-sized scoops, you’ll have to say bon voyage to a few. On this latest tour I skipped Earl Grey (bc I can make that myself), Pineapple Li Hing Sorbet (bc I’m allergic to pineapple and not looking to die before the world tour even begins), Wanderlust Vanilla (bc you all know how I feel about vanilla – I don’t. I don’t feel about vanilla.), and Kinder Bueno (bc it of course is bueno, but I can also just go buy a Kinder Bueno).

So where did I go on my flight?

I started in Thailand with a Thai Iced Tea
then I headed over to Italy for Balsamic Macerated Strawberry Sorbet
to the Philipines for Ube Malted Crunch
next to Spain for a quick Catalonian afterschool snack of Pa Amb Xocolata (baguette spread with dark chocolate and drizzled with olive oil and sea salt)
Mexico for Cuatro Leches (why stop at tres??)
South America for a Tonka Bean Latte
Provence for some Honey Lavender (and a quick roll in the lavender fields)
met Björk at her house in Iceland for Pretzel & Rugbraud (rye bread)
then back to Thailand for Sticky Rice Mango
back to the Mediterranean for Fig Leaf & Pistachio (didn’t need to stop in 1000 churches or visit any headless sculptures!)
back to Mexico for Abuelita Malted Crunch
over to Japan for a Sakura Latte (since I missed cherry blossom season while I was hanging out in Iceland and Mexico and Italy), as well as Japanese Neapolitan (made with matcha, hojicha, and black sesame layers)
reentering the USA via the Pacific Northwest‘s Smoky Road – home sweet smoky marshmallow home…..

Luckily, my tour group was filled with enthusiastic explorers each preferring different cultural flavors, so the threat of an ice cream war was thwarted. #icecreamforworldpeace #icecreamforpresident